£45 offered from £450 of purchases with the code* - SEPT21 *Excluding special offers, en-primeur wines and rare wines. Valid only once per customer.

Chateau Grand Puy Lacoste has changed little since its admission to the imperial classification of 1855. With the same configuration that was registered at its classification, the estate is...Read More

Chateau Grand Puy Lacoste has changed little since its admission to the imperial classification of 1855. With the same configuration that was registered at its classification, the estate is comprised of a vineyard consisting of a single piece of 55 hectares planted with 75% Cabernet Sauvignon, 20% Merlot and 5% Cabernet Franc. This Fifth Classified Growth in Pauillac has great strength and produces classic and seductive wines.

One of the oldest properties in the Medoc, specifically in the Pauillac  appellation, the history of Grand-Puy-Lacoste is captivating in many ways. The name Grand-Puy, already mentioned in documents from the Middle Ages, comes from the ancient term “puy,” meaning “hillock” or “small height.” The vineyards of Grand-Puy-Lacoste sit on outcrops with a terroir similar to that of the Medoc’s first growths. 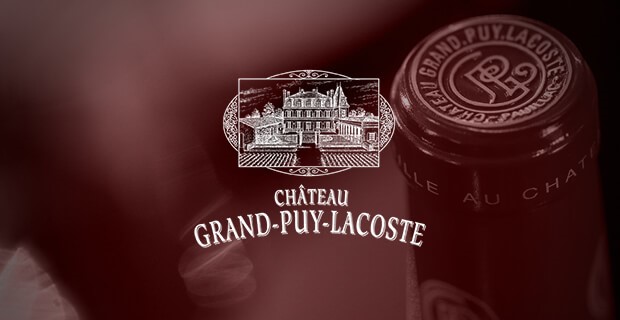 The Early History of Chateau Grand-Puy-Lacoste

Dating back to the sixteenth century, the first owner on record was M. de Guiraud, a member of the Bordeaux Parliament. The estate was used as a dowry and passed along female lines of inheritance. In fact, Grand-Puy’s name has been changed numerous times through marriage. It wasn’t until seven generations later, that Guiraud’s great-great-great granddaughter, Marie-Jeanne de Saint Guirons, married Francois Lacoste, and the name stuck. Their son, Pierre-Frederic Lacoste, inherited the property in 1844, and was deeply committed to improving the quality and reputation of his family’s estate. In 1855, the same year as the famous 1855 Classification of Bordeaux at the Universal Exposition in Paris, Lacoste rebuilt the Chateau, which was officially classified as a higher status property through inclusion in the official listing of Bordeaux’s Great Classified Growths as a “fifth growth.”

The Lacoste family maintained control of the property until 1920, when the First World War had a devastating effect on the winemaking families in Bordeaux. Elie and Edouard de Saint Legier d’Orignac, grandchildren of Pierre-Frederic Lacoste, were destitute and had to sell the estate, ending almost five centuries of family ownership.

The estate then fell into the hands of the colorful Raymond Dupin, a rich negociant and a well-known figure in Bordeaux society. A passionate man, with a love of wine, he presided over the Council of the Medoc Great Classified Growths, and brought a very personal touch to Grand-Puy-Lacoste. In 1978, without direct descendants, he decided to sell the domain, but wanted to personally choose his own successor. Jean-Eugene Borie, a frequent guest at Dupin’s lavish parties, a “real Medocain” was a professional with children interested in winemaking who would continue working the property; an easy decision for Dupin. After selling the property, Dupin became close friends with Jean-Eugene’s son Francois-Xavier and his wife Marie-Helene and visited the chateau frequently. He remained a welcome visitor until his death in 1980.

The Borie name has long been associated with skilled winemaking of the highest quality. At the end of the nineteenth century, Eugene and Emile Borie created a negociant firm, seeing vast potential to develop a thriving economy in rural Bordeaux. They traveled to develop their market, and eventually purchased cellars in Pauillac, specializing in shipping wine to Normandy, northern France and Belgium, while their competition focused on the British market. Their prosperity and reputation grew. In 1901, Eugene and Emile decided to build their own cellars and age wine themselves with vineyard sites including Chateau Saint-Gemme, a Cru Bourgeois in Saint-Laurent, just southwest of Saint-Julien. Now they were not only negociants, but also winemakers.

This collaboration between brothers passed down to the next generation, when Eugene’s sons Francis and Marcel went to work for their uncle Emile, after their father passed away. Upon their return from the First World War, they purchased Chateau Batailley, a fifth growth in Pauillac, becoming Borie Freres. In 1939, the brothers decided to form their own company and each took over one-half of Chateau Batailley. Francis’ part became Chateau Haut-Batailley, now owned by his daughter and managed by Francois-Xavier Borie. Two years later, Francis bought Chateau Ducru-Beaucaillou, a second growth in the 1855 classification. The second growth Chateau Ducru-Beaucaillou became the main focus of Francis and his son, Jean-Eugene Borie. Upon Francis’s passing in 1953, Jean-Eugene took over the estate, creating a reputation of quality and brilliant winemaking for the Borie name. It is not surprising that when Raymond Dupin was looking for someone to take over Grand-Puy-Lacoste, he thought of his friend Jean-Eugene Borie. After acquiring the estate in 1978, Jean-Eugene’s son, Francois-Xavier became the vineyard manager. His challenge: to wake up this “sleeping beauty.”

Situated in Pauillac, one of the Medoc’s six communal appellations along the Gironde estuary’s Left Bank in Bordeaux, France, Grand-Puy-Lacoste possesses a number of benefits from the classic terroir. Pauillac itself boasts eighteen properties classified in the 1885 classification. It is separated from Saint-Estephe to the north by the marshy area of Breuil, and from Saint-Julien to the south by the hollow formed by the Juillac stream.

The plateau of Grand-Puy Lacoste is west of the village, above the hamlet of Bages. The outcrop rises to around 20 meters above sea level, the aspect of the subtle slopes are favorable for vineyard management. The estate comprises 90 hectares, 58 planted with vines, entirely located around the Chateau. Since the Borie’s acquisition of the estate, they have been patiently replanting the vineyard area. There is now balance between young and old vines, the average age being 38 years.

The soils found in the vineyards of Grand-Puy-Lacoste are gravel, which ensures an excellent drainage of rainwater. There is rich history found in Bordeaux, and part of it lies in its soils. The gravel found there is a product of the Quaternary era, when stones brought from the Pyrenees by the Garonne were deposited along the banks of its estuary, the Gironde. Today, they mix with sand and clay to form gravel outcrops, which drain water to the Gironde. The gravel soils are well-suited for quality vine-growing as they have the advantage of absorbing heat during the day and releasing it to the grapes at night, eliminating excessive variations in temperature and promoting even ripening in the grapes.

The location of Grand-Puy-Lacoste allows it to greatly benefit from the maritime climate of Bordeaux, influenced by the proximity of the Atlantic and the Gironde estuary. The climate in Pauillac is balanced by great sunshine, hot summers and mild winters. Winds coming from the ocean create a particularly favorable microclimate, as they cross the coastal pine forest and slow down upon meeting air currents from the estuary, introducing a measure of humidity to the atmosphere characteristic of Bordeaux. The finest vintages are always a product of a hot and dry summer, followed by a late growing season.

In the vineyards, Francois Xavier is deeply committed to a very precise management. During the last twenty years, he cut chemical treatments in half, eliminated insecticide usage, and was able to restore the natural fauna of the vineyard. The soil has always been worked manually, with no herbicides, and double-guyot pruning.

During harvest season, a first “green harvest” is done, while grapes are still unripe, to bring yields down to around 40 to 50 hectoliters per hectare. Each year, the date of harvest is carefully determined to achieve the best possible maturity. The grapes are picked by hand and gently transported in crates to keep them intact until they reach the vat house. The grapes then pass through two vibrating sorting tables before de-stemming.

Grand-Puy-Lacoste’s second label, Lacoste Borie, was created in 1982. The wine is harvested from the same vineyards, the grapes destined for the second label are the estates younger vines, producing a more accessible wine with an earlier drinking window. The Lacoste Borie is a full-bodied Bordeaux blend that can be enjoyed young, but can still cellar for a decade. This wine has plenty of robustness, structure and complexity, elements that characterize the wines of Grand Puy Lacoste. If you’d like to enjoy a nice meal just like the French do, just grill a piece of meat with potatoes to accompany your Bordeaux and you’ll be set. And don’t forget the cheese!