Timeless and mythical, the Bollinger Champagne...

Timeless and mythical, the Bollinger Champagne House - nicknamed "Boll" for the people of the Champagne region and "Boly" by English-speaking Champagne lovers - is part of the small circle of grand Champagne houses. Founded in 1829 in Aÿ, in the Marne department, the Champagne Bollinger house has built its original style and excellence through the meticulous attention paid to each stage of the winemaking process, from the sourcing of the grapes to the fermentation in small oak barrels and maturation of each vintage for over ten years, twice the length of time required by the appellation.

The strength of the Champagne Bollinger house lies in its vineyard. 174 hectares of vines can be divided into seven main vineyards, 85% of which are Grand and Premiers Crus, making this estate one of the rare few in Champagne to produce its own grapes used in the blend. The house's signature variety, Pinot Noir represents roughly 60% of the vineyard's total planted vines.

The style of Champagne Bollinger can be recognised easily by the exemplary precision at each level in the winemaking process. A deep respect for tradition, a manual riddling of bottles, corking bottles of reserve magnums and using barrels made by a resident cooper, the quest for excellence has truly come to symbolise Champagne Bollinger. More than just an art, theirs is a heritage.

From the Cuvée Brut Special Cuvée to the Cuvée R.D through the Brut Rosé or the vintage Cuvée La Grande Année, Champagne Bollinger produces a range of emblematic wines, each endowed with a unique personality, an identity.

The elegant Madame Bollinger, nicknamed Madame Jacques, was not wrong when she said that everyone from the simple amateur to the connoisseur deserves a glass of Champagne Bollinger.

Lily Bollinger described the perfect moments for enjoying her family’s champagne: “I drink it when I’m happy and when I’m sad. Sometimes I drink it when I’m alone. When I have company I consider it obligatory. I trifle with it if I’m not hungry and drink it when I am. Otherwise, I never touch it—unless I’m thirsty.” Bollinger Champagne isn’t just for those big celebratory life moments, but it’s also for those perfect and not-so-perfect little occasions in life. What could be better than Bollinger Champagne that bubbles with perfection, singularity and precision for those moments when you are happy, sad or thirsty? 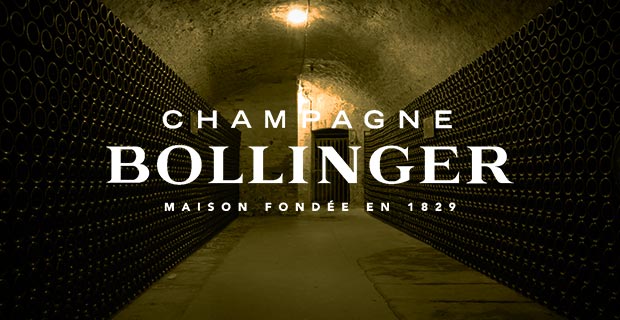 Bollinger: The Road to Perfection

The Bollinger story is one that goes all the back to the early 1800s with Athanase de Villermont who saw tremendous potential in the vines of the estate that he inherited from his family in the Aÿ area. He set up the Renaudin-Bollinger & Cie in 1829 with Joseph Bollinger and Paul Renaudin. The image of the House started to take off in the 1880s when Joseph and Georges Bollinger took over the House. During this time, the House had such recognition that it received a Royal Warrant in 1884 from Queen Victoria to be one of the official providers of Champagne to the Royal Family, a title that the House still holds today. The next surge in the House’s reputation started from the 1940s with Lily Bollinger. Under her leadership, she expanded production through purchasing more vineyards, and promoted the brand through her world travels. Since its founding six generations ago, the Bollinger Champagne has become one of the leading and most emblematic estates in the Champagne region. This spirit of perfection, singularity and precision continues under the leadership of Jérôme Philipon who runs Société Jacques Bollinger (SJB) as its COO, and continues with Charles-Armand de Belenet as the General Manager of Bollinger Champagne, both of whom have been in their positions since 2017.

Bollinger’s uncompromising commitment to quality and refinement comes from a philosophy of perfection, singularity and precision. Every single bottle is a quest for perfection through paying rigorous attention to detail. Singularity also makes these wines truly exceptional: the mastery of the Pinot Noir variety, its commitment to the continuity of its style with its 700,000-reserve magnum collection, and ageing requirements that are twice as long as appellation regulations. And last, precision plays a great role in assembling these extraordinary wines. For almost two centuries, each generation has continued to perfect the House’s production techniques and then pass them down to the next generation. These ancient skills and craftsmanship have been distinguished with the Entreprise du Patrimoine (EPV) label from the French government that recognizes traditional and industrial know-how excellence – the first champagne House to get such recognition.

Perfect Cuvées come from the Perfect Terroir of Bollinger

The perfection of Bollinger Champagne has its beginnings in its terroir in the Champagne region. The terroir consists mostly of limestone with sedimentary rock outcrops composed of chalk, marl and limestone. The limestone and chalk components impart that mineral flavour on some champagne wines. The Bollinger vineyards are an indispensable part of the region. There are seven vineyards with 85% of them planted with Grand Cru and Premier Cru vines. In total, the House has 174 hectares spread throughout the region with Pinot Noir accounting for 60% of the total vineyard area, and Chardonnay and Pinot Meunier making up the rest. All of Bollinger’s vines are part of the House’s commitment to sustainable winegrowing practices like the use of biological pest control instead of herbicides and the recycling of pruning wastes. The House has even obtained a High Environmental Value certification that validates its practices to protect the delicate environmental balance in the vineyards. Bollinger Champagne is the very first champagne House to receive such certification in the region!

Once the harvest is over, the perfectly ripened berries are in the hands of Bollinger’s Cellar Master, Gilles Descôtes. He has kept the practice of vinifying the House’s best wines in old, oak casks – a practice that is rarely used in champagne production nowadays. The biggest challenge is assembling the blend with wines from the current vintage and reserve wines, a skill that requires both artistry and foresight to know how the wine will evolve in the future. After blending, the wines are bottled and then allowed to age in the cool, chalk cellars. The Special Cuvée will stay there for at least three years while the vintage champagnes linger in the dark for much longer. This time spent in silence allows the wines to develop their elegant aromas and refined, smooth streams of bubbles. As each year passes, more of the finest wines are added to this collection that now totals 700,000 reserve magnums. Bollinger Champagne has mastered the art of blending to perfection with its infinite choices of reserve wines. This perfection continues through riddling, to disgorging and adding the liqueur d’expedition, in which the smallest dose of sugar is added to maintain the wine’s balance. Once corked and caged, the champagne is then clad in the House’s emblematic red and white packaging, and sent around the world where this extraordinary wine can be enjoyed for all those life moments.

The Perfected Collection of Bollinger

Bollinger Champagne offers a range of extraordinary wines of exceptional quality and unique characteristics. The Special Cuvée is the House’s flagship wine that represents its unique house style. It’s a non-vintage champagne that blends wines from a given year and reserve wines. It’s made up of 60% Pinot Noir, 25% Chardonnay and 15% Pinot Meunier with up to 10% of the entire blend consisting of reserve wines. The wines are elegantly complex, and tend to reveal toasty notes as they age. The Grande Année is a vintage champagne that is only made when there are exceptional harvests. These wines specifically express the character of the vintage that reveal the traits of Pinot Noir (65%) and Chardonnay(35%), and will have delicate yeasty notes since they spend five years on lees. Grand Année is also available as a Rosé champagne.

Finally, there is vintage Bollinger R.D. Like the Grand Année, it has always been a James Bond ‘007’ favourite with its extensive lees ageing. However, the R.D. spends eight years on its lees. The R.D. part of the name means récemment dégorgé (recently disgorged), and one of the most recent ones is the R.D. 2004 that is a blend of 66% Pinot Noir and 34% Chardonnay, which uses 16 crus, 88% Grand Crus and 12% Premier Crus. Ageing was carried out for four times longer than the appellation requirements to give a deep gold, but bright colour. The nose evolves into stewed candied fruits with hints of sweet spice while the palate offers a harmony of cooked fruit and tarte tatin flavours. The recent disgorgement brings freshness to the champagne, a champagne that is the epitome of perfection, just like its makers, Bollinger Champagne.