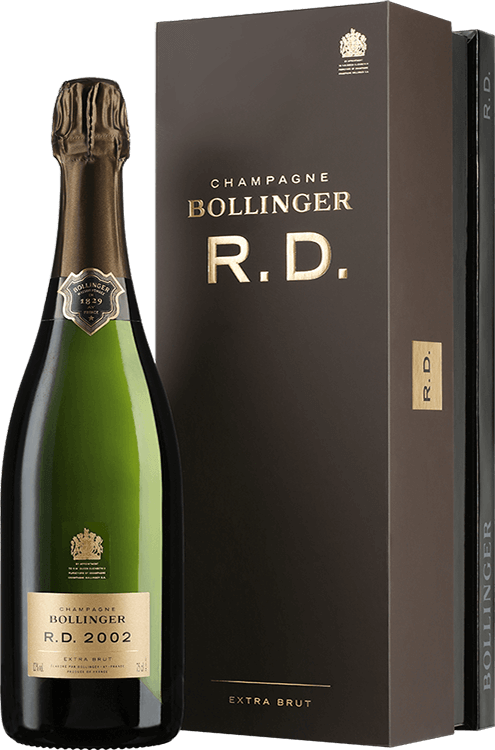 Timeless and mythical, the Bollinger Champagne house, "Boll" for people from Champagne or "Bolly" for the English, is part of a small circle of great Champagne houses. Founded in 1829 in Aÿ, in the Marne department, the Bollinger Champagne house has built upon a style marked by originality and excellence through close attention, from procuring the grapes to winemaking. Fermentation is carried out in small oak barrels and the ageing of vintage cuvées takes over ten years, twice as long as indicated in the specifications for this appellation.

It was during the 1960s that the house produced the R.D. "Récemment Dégorgée" cuvée, a symbol of Bollinger’s creative daring. Conceived by the celebrated Madame Bollinger, the R.D. cuvée is a vintage "Extra Brut" champagne aged on lees, offered for tasting just after disgorgement. Unfettered by time restraints, the R.D. Bollinger cuvée, by creating a unique taste, lies at the root of a revolution in the world of Champagne.

An exceptional cuvée produced only during greatly years, the 2002 R.D. Bollinger reveals the exceptional aromatic expression of its vintage in a Champagne which took the time to develop while retaining its shine. The 2002 vintage is one of the most promising from its decade.

The winemaking and ageing

After the harvests, the Chardonnay and Pinot Noir grapes are taken to the cellar to begin the custom-made winemaking process. The ageing time is particularly long, over three times longer than appellation regulations, so the aromas can be tirelessly transferred until a perfect wine alchemy is obtained. Indeed, the wine ferments in oak for a long time to develop its aromas and complexity. Dosage is very low, truly "Extra-Brut", with only 3 to 4 grams per litre. The 2002 R.D. Bollinger is only put on sale a few months after disgorging, giving the wine a remarkable freshness.

The aromatic bouquet is complex and particularly marked by ripe and puréed fruits, more specifically quince enhanced by a touch of honey. Then, notes of grilled cocoa harmonise with aromas of star anise and nutmeg.

The 2002 R.D. Bollinger is a great champagne with a fleshy attack. Power meets a perfect balance and great persistence. This aromatic character extends until a mineral finish, marked by pleasantly bitter, lemony hints.

The 2002 R.D. Bollinger truly enhances all variations of risotto, more specifically those including mushroom or which are lightly truffled. This cuvée will also go wonderfully with game, Old Comté and Swiss Gruyère.

The 2002 R.D. Bollinger offers two great tasting moments. It is possible to taste it in the year following its disgorging so as to fully make the most of its particular aromatic character and wonderfully fresh notes. However, the 2002 R.D. Bollinger can also be appreciated after several years in a cellar, when all of the depth of its aromas and the remarkable character of its amazing ageing potential will be revealed.

For an optimal tasting experience, serve at 8 to 10 degrees C.

Wine Advocate-Parker :
Big names do not help if you are not familiar with a certain house style, and so I can understand everyone who dislikes Bollinger's 2002 RD Extra Brut, which at first sight reveals a matured if not an old wine displaying toffee, floral (hyacinths, narcissus, sage), vegetal and spicy aromas (oak, cannabis, frankincense, black bread) -- but almost no fruit (at least no fresh fruit). This wine was disgorged in March 2014, but just needs a lot of time in the glass to develop its complexity. On the palate this is a very pure, fresh, lively, firmly structured and almost ascetic wine with complexity, but almost no sensuality. Very distinctive style.
Champagne