Gianfranco Fino’s adventure began in 2004 in the heart of Puglia in the south of Italy. After years of expertise in olive oil production, he decided to follow a new dream: growing his own...Read More 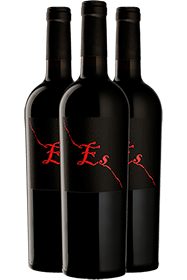 Gianfranco Fino’s adventure began in 2004 in the heart of Puglia in the south of Italy.

After years of expertise in olive oil production, he decided to follow a new dream: growing his own vines and producing his own wine. He found a small plot of Primitivo (Zinfandel), a grape variety native to Italy, and bought a small 1.3 ha vineyard in the province of Manduria.

Gianfranco Fino's mission was to create a wine from only the old vines of his region. To produce his renowned and award-winning cuvées, such as Es and Jo, Gianfranco Fino treats with very special care his vines of 50 to 90 years old. Given the period in which the vines were planted, in the first half of the last century, and their random arrangement, the use of machines is not possible during the harvest, which means that all vineyard work must be carried out manually and with great care. Winemaking on this terroir is done using exclusively wild yeasts found naturally on the skins of the fruit, lending a special character to the wines.

A prestigious cuvée, Es is a Primitivo of the IGT Salento appellation, which has been chosen to grace the tables of great world leaders at the G8 Summit of 2008.

Since 2004, Gianfranco Fino has achieved the greatest distinctions for Italian wines. In 2010, he was awarded the title of winemaker of the year by the prestigious magazine Gambero Rosso, making him the first winemaker in Puglia to win this award. Today the vineyard has grown to 21 hectares, through the acquisition of several old plots between Manduria and Sava. These small vineyards allow him to also cultivate Negroamaro, the star grape variety of the region.