A legendary German estate, Egon Müller is an important part of the history of the Mosel wine region. Today it is part of the Saarland state. Since the founding of the estate in 1797, the same...Read More

A legendary German estate, Egon Müller is an important part of the history of the Mosel wine region. Today it is part of the Saarland state. Since the founding of the estate in 1797, the same family continues to own this land, expanding over 28 hectares in Scharzhorfberg, where the exceptional limestone soils nevertheless pose quite a challenge when it comes to working them. During Napoleon's campaigns and after his secularisation of the clergy land, those of Schazhorfberg, formerly property of the clergy, were bought by Jean-Jacques Koch. Cleared centuries ago for the vine, the Scharzberg hill, whose name translates in French to "the mountain of the essarts" or "cleared places" in old French, seems to have been created for the production of perfect wines, made possible by its excellent sun exposure and the quality of its terroir. However, it was not until the 1870’s that the wine trade finally took off in this region, clearing the path for the reputation this estate enjoys today: that of a living legend.

The 8-hectare plot situated on the Scharzberg hill - the largest in the region - is considered truly sacred. The care given to these vines, which include 3 hectares of old, ungrafted vines from the 19th century, is limited, in order to allow for noble rot to spread and to maintain a certain purity in the estate’s precious vines, produced exclusively from Riesling. The Egon Müller estate today produces some of the best Pradikätswein, whose signature style is attributed to the vineyard’s shale soils, which give the wines a certain length, elegance, depth and finesse.

Producing legendary wines, prized by wine lovers around the world, the Egon Müller estate is renowned for its golden wines, whose aromas boast an incomparable finesse and delicacy, balanced by high acidity and a vibrant, energetic mineralit.

Egon Müller also owns another domain called "le Gallais", in the Wiltinger Braune Kupp region near the Scharzhof, as well as Château Belà in Slovakia, from the family of the current owner’s wife: Egon IV.

Superlatives abound when it comes to Egon Muller, the undisputed king of German Riesling. The estate’s top bottlings have fetched some of the highest prices at auction among any white wine in history and, considering quality, it is easy to understand why. In the well-drained, gray slate soils of the legendary Scharzhofberger vineyard, considered a “Grand Cru” of Germany’s Mosel region, Egon Muller cultivates ancient Riesling vines, many of them ungrafted and planted in the 19th century. 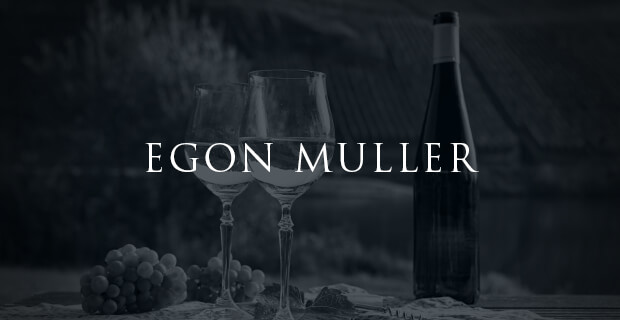 When the fruit has reached the pinnacle of its expression, it is vinified at a range of different sweetness levels, going resolutely against the global demand for ever dryer whites with timeless styles impervious to trend. The Rieslings of Egon Muller offer a kaleidoscope of floral, fruit and earth reverberations, an electric acidity coursing through a filigreed and sometimes quite luscious palate, a finish marked by a mouth-watering minerality and a saline, grapefruit-pith aftertaste. Their portfolio showcases Riesling at the height of its potential and to taste any of the estate’s sought-after bottlings is to fully understand the magic of this noble grape variety.

The legendary Scharzhofberger vineyard of Egon Muller is believed to have originally been planted by the Romans and cultivated by the St Marien ad Martyres monastery during the Middle Ages. Now part of the Rhineland-Palatinate area of Germany, this estate in the Saar district of Mosel on the banks of the Rhine River was French during the 18th century. During the French Revolution, the vineyards were seized from the clergy and resold as national property. It was a man by the name of Jean-Jacques Koch who acquired it in 1797.

Throughout the 19th century, the estate came under the ownership of the Muller family through the marriage of Koch’s daughter, who would bear a son by the name of Egon Muller I (the first of five Muller men with the same name). In 1954, Egon Muller III extended the vineyard by purchasing 6 acres of the Le Gallais estate in Wiltingen, which include the single vineyards of Kupp and Braune Kupp. In 1991, Egon Muller IV of the 6th generation became the manager of the estate and was left as the sole manager when his father passed away in 2001. Just one year before, in 2000 Egon Muller V was born. The Muller family is today the only German member of the prestigious 12-strong Primum Familiae Vini group, established in 1993 and including other leading producers, like Vega Sicilia in Spain, Chateau Mouton Rothschild in Bordeaux and Tenuta San Guido in Tuscany.

At the heart of the Egon Muller estate is their 21-acre piece of the 70-acre Scharzhofberg vineyard, situated southeast of Wiltingen on the banks of the Saar River in the Saar Valley region of Mosel in Germany. Scharzhofberg is considered one of the best in the world for Riesling (and white wines in general), akin to a Grand Cru site in Burgundy. The south-facing Egon Muller Scharzhofberg plot is even home to some ungrafted vines originally planted in the 19th century. These densely planted vines stretch their roots deep into soils of grey shale (slate), producing a very small yield of incredibly fine Riesling, considered some of the best in the world. The slate soils of the vineyard are considered the origin of quality at Egon Muller. They are well-drained (in a region that receives quite a bit of rain) and they warm up quickly, keeping the vines warm under the sun even during the coldest seasons.

The estate cultivates 10 acres of smaller vineyards in Le Gallais, further down the Saar River between Wiltingen and Kanzem, including the Kupp and Wiltinger Braune Kupp single vineyard plots (which are vinified into their own eponymous bottlings). The rest of these vineyards are used to produce their less expensive, generic Scharzhof Riesling. Outside of Germany, Egon Muller also collaborates with winemaker Miroslav Petrech to produce world-class Riesling in Slovakia under the label Chateau Bela. He works with Michael Andrewarta of East End Cellars to produce a dry Riesling by the name of “Kanta” in the Adelaide Hills of Australia. Today, Egon Muller works exclusively with the Riesling variety, the flagship grape of the Mosel.

Following a manual harvest, the Riesling grapes are pressed without the skins, then fermented and aged in the large oak casks of 1,000 litres traditionally used in Mosel. For most of their cuvées, fermentation takes place using exclusively indigenous yeasts. Despite the global trend towards dry wines, Egon Muller proudly produces Pradikätswein Riesling wines in a broad range of styles by harvesting their fruit at different times and vinifying them at various levels of sweetness. They produce everything from an off-dry Kabinett Riesling to Spatlese and Auslese with residual sugar, as well as sweet Beerenauslese and Trockenbeerenauslese from grapes infected with Botrytis cinera (noble rot) and Eiswein in vintages where weather conditions allow for it.

A world-renowned estate producing some of the most sought-after and expensive white wines in the world, Egon Müller stands out for its extremely complex and remarkably age-worthy Riesling wines.

Their most accessible Scharzhof Riesling is made from grapes harvested in the Saarburg and Wawern vineyards of the estate, as well as from the Wiltingen Braunfels and Wiltingen Kupp single vineyards. A great introduction to the Egon Muller range, this very slightly off-dry Riesling displays a floral nose of elderflowers and saffron, followed by a silky texture on a spicy, mineral palate. A wine to age 10-12 years.

From the Le Gallais estate of Egon Muller, the Braune Kupp Spatlese Riesling is a very clear and precise white wine with a refreshing flinty minerality on the nose and a lush, round palate layered with ripe yet fresh stone fruit flavours. This wine will pair beautifully with a wide range of dishes, especially fresh fish or shellfish.

And from the legendary Egon Muller Scharzhofberg vineyard comes a variety of bottlings in different styles, international considered the pinnacle of German Riesling and fine white wine in general. The Scharzhofberg Kabinett Riesling reveals crunchy slate and bright fruit aromas, followed by a saline and mineral palate. This is the ideal food pairing wine, a beautiful match with the bold flavours of Sichuan and Thai cuisine. Meanwhile, the Scharzhofberg Spatlese Riesling shows a kind of smoky minerality on the nose and enchants the palate with its round, generous and intense texture. The Scharzhofberg Auslese Riesling is simply out of this world, with a cool nose of flinty, crunchy slate and citrus, followed by a palate that is incredibly refined, concentrated and balanced.

While enjoyable now, these wines evolve beautifully in the bottle over the course of several decades. These sweeter styles go well with pungent cheeses or foie gras, a classic pairing. As they age, they also develop a kind of bitterness that balances the residual sugar and acts like tannin, allowing older vintages to pair even with roast beef or steak.