Located at the edge of Pomerol in the western part of the Saint-Émilion appellation, Château La Dominique is one of the most prestigious properties on the Right Bank of the Bordeaux region. A...Read More

Located at the edge of Pomerol in the western part of the Saint-Émilion appellation, Château La Dominique is one of the most prestigious properties on the Right Bank of the Bordeaux region. A Grand Cru Classé of Saint-Emilion ranked in the first classification of 1955, the property produces wines of the highest quality, similar to its closest neighbours: the famous Château Pétrus, l’Évangile, La Conseillante et Cheval Blanc. Château La Dominique is named after the island in the Caribbean, where its owner at the time, a rich merchant from Libourne, first made his fortune. Purchased in 1969 by Clément Fayat, the estate has experienced a new era thanks to the ambitious renovation project launched in 2010 and aimed, in particular, to extend the estate from 25 to 29 hectares. A new modern winery was constructed, designed by the architect Jean Nouvel. Driven by sustainable agriculture, Château La Dominique extends over a vineyard planted on an exceptional terroir, combining clayey brown soils with sandy soils on a clay sub-layer.

With vines that are on average 31 years old and planted at a density of 7,000 to 9,000 plants per hectare, Château La Dominique is 81% Merlot and 16% Cabernet Franc and 3% Cabernet Sauvignon.

Château La Dominique has become known throughout the world for its particular style. Expressing all the generosity of the Saint-Émilion terroir as well as the spirit of Pomerol, Château La Dominique produces wines with a fruity and sensual character, pleasant to savour in their youth but also blooming superbly with age.

As you look across the rolling vineyards of Saint-Émilion on Bordeaux’s Right Bank,  Château La Dominique stands out for its stunning architecture. The imposing crimson walls of its cellars draw your eyes to the surrounding vineyards that produce some of the most refined wines of the appellation. Let’s take a tour of its vineyards and winery to know how this Crimson King got its crown as one of the best in the region. 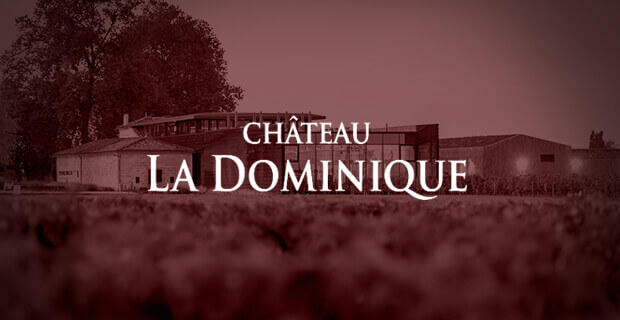 From King Louis XIV to the Fayet Family

Château Dominique has an illustrious history that first dates back to 1690 when King Louis XIV recognized the proporty under the ownership of Jean Micheau. However, it isn’t until 1785 that we first see the name ‘Dominique’mentioned on a local map that has property belonging to Mr. Fontémoing, a Libourne wine merchant. The château switched hands several times over the next 150 years, until the Baillencourt family took over in 1933. It was under their ownership that Château La Dominique got its Grand Cru Classé title that it has retained since then. In 1969, the château changed hands one last time and purchased by Mr. Clément Fayat, who is also has one of the largest construction companies in the world. Rumor has it that Mr. Fayat was dining with Right Bank négociant-éleveur Jean-Pierre Moueix and other freinds when they recommended that he should have his own château – and so he bought La Dominique. He gave the property a much-need investment program that included draining the vineyards, rebuilding the cellars and introducing a new vinification program, which has led to the estate’s revival.

From the Vineyard to the Vats – Contemporary Winemaking at its Best

The 29-hectare vineyard has 81% Merlot, 16% Cabernet Franc and 3% Cabernet Sauvignon grown in deep gravel over brown clay with a bit of sand mixed in to give elegant and fresh wines. To produce these refined wines, only the best grapes are used, so they are all hand-harvested from 31-year-old vines. In the vineyard, you can see the estate’s sustainable agricultural practices that include natural grass cover every second row. Recently, the château is experimenting with biodynamic farming with 5 hectares, and it expects to increase the number of biodynamically farmed hectares in the future.

Once the grapes reach the winery, they are destemmed, and sorted first with a blowing grain separator and then by hand on a vibration table. After, they are gently crushed before they are stored in a cold room for 12 to 24 hours so as to get the most out of pre-fermentation maceration. Fermentation then occurs in 22, 73hL tapered stainless steel temperature-controlled vats for a 25 to 35 maceration period. La Dominique wines undergo malolactic fermentation in both the vats and new oak barrels and aged on their lees for 5 to 6 months with lees stirring only in the first month. After this exhustive process, La Dominique gets about 90,000 bottles from its vineyards.

As we approach the estate, the contemporary cellar’s crimson walls accentuate the rolling vineyard landscape. Clément Fayat commissoned this new cellar in 2014 with the help of architect Jean Nouvel with the intent to improve the vinification facilities and increase production capacity. The building rises over the vineyard and encompasses a wine cellar and vat room. The most striking aspect is the 6-shaded mirrored red-stainless steel blades that adorn the outside of the wine cellar. Mr. Nouvel’s intent is to play on our perception of the varying shades of red to represent the multi-tonal nature of wine. Depending on where we stand in the vineyard, we can see the reflection of the vines themselves as fragmented images in the mirrors.

We can make our way up to the top of the roof through a stunning staircase with reflecting red walls that open up to the sky. Once on the top, there is a panoramic view over the entire appellation that includes neighboring châteaux and villages. As we walked across the terrace, our feet tread on red glass pebbles that symbolize grapes. Part of the terrace also includes La Terrasse Rouge, a Bordelais brasserie that opened up in 2014 as part of the estate’s wine tourism efforts.