A magnum of Lune d'Argent 2018 for free with your next order with the code* - SUMMER22 | Buy now *Offer valid on orders over £255, cannot be combined with other ongoing offers and does not include en primeur wines. Valid only once per customer. 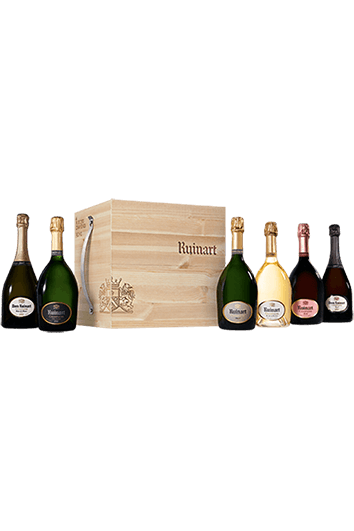 The very first Champagne House founded in 1729, Ruinart is an essential reference. The historic Ruinart Champagne House owes its creation to the visionary and pioneering monk, Dom Thierry Ruinart. Located in the heart of Reims, the Ruinart House watches over a treasure. Unique, historical landmarks and architectural prowesses, the Ruinart chalk quarries have been classified as a historic site since 1931 and listed as a UNESCO World Heritage site in 2015. Located at nearly 40 metres below ground, in the darkness and coolness of the cathedral-like cellars, the precious bottles wait to be brought to light. Elegance, style and timelessness define the DNA of the Ruinart Champagne House, which is one of the most valued brands in France, embodying the excellence of the French ‘’art de vivre’’ in all four corners of the world.

The pioneering Ruinart Champagne House was the first to ship its bottles in wooden crates as early as 1769, before this became a widespread practice at the beginning of the 19th century.

Designed by the Ruinart Champagne house and made entirely from wood from sustainably managed forests, this Urbaines l'Intégrale box set can be given a second life and turned into an urban cellar where 6 to 12 bottles can be stored.

- the famous "Blanc de Blancs", the emblem of the Ruinart flavour

- the Ruinart "Rosé", one of the very first rosé champagnes created more than 250 years ago, which seduces due to its delicacy and its elegant freshness

- the "R de Ruinart millésimé 2011", a true vintage expression of the Ruinart taste

- the "Dom Ruinart Blanc de Blancs 2007", reveals the complexity and purity of the finest Chardonnays

- the "Dom Ruinart Rosé 2007", with its fresh and roasted aromas, by Ruinart

Combining innovation and elegance, adorned with a branded label representing the name and coat of arms of the House, this Urbaines L'Intégrale box set will seduce wine lovers by offering the unique opportunity to enter the Ruinart world and discover this range.